skip to main | skip to sidebar

I am finally back from my short hiatus. Actually I changed employment recently so from 2009 to the best half of 2011 i did not post anything on my blog.

I thank you all for your patience. I did a job transistion from the field of Libray to the Human Resources and am currently working with a government statutory body as a HR officer.

Posted by Eliud Uwasenko at 9:16 AM 0 comments 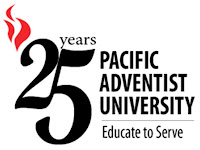 Pacific Adventist University is gearing up for a big celeberation this year.It will celebrate its 25 years of existence as an academic institution.

Many former staff and students from across the Pacific will cenvene at the campus from August 28th -30th, 2009. It will be the highlight of this year and preparation are already well underway.

The institution started as Pacific Adventist College in 1983. Classes began in 1984 after it was opened in the same year. Diploma adn certificate courses were offered during the early years and eventually degree courses were added.

In 1997, the goverment recognised and granted university status. Pacific Adventist University is currently striving to be recognised as a primier academic institution in the South Pacific region.
Posted by Eliud Uwasenko at 10:03 AM 4 comments 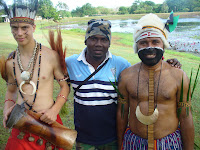 Pacific Adventist University or PAU in short is one of the leading universities in Papua New Guinea. It is situated 14 mile out of Port Moresby along the Sogeri Road.
It is a multicultural campus with students coming from across the pacific as far as Cook Is, Fiji, Tahiti, Kiribati, Samoa, Tonga and even the Philippines and Malaysia. In the past there were some students from China, Pakistan and Australia.

The campus is tucked away near the foothills of Mt Eriama. It is a well kept campus with beautiful and breath taking scenery, with three man made lakes teeming with fishes, amphibians and birds. It is a declared bird sanctuary in the country which attracts many tourists yearly. The smallest duck and frog-mouths bird are amongst those attraction that lure bird watchers from abroad.

Beauty and tranquility are not only the reasons that attract visitors to the campus but security and friendliness of residents of the campus also play a vital role.
Amongst those changes that are taking place at the university is the upgrading of the IT facilities to broadband through PNGARNET. A new administration block was completed last year by Home Guard construction and is now occupied by the administration. The library which used to accommodate the administration block is now fully delegated to library purpose.
A new agency for publishing arm of the SDA mission has been completed at the campus. this will cater for all Colportuer's needs in the local mission field.
PAU is a developing university that is yet to see more changes in the near future. Many development projects are in the pipe line.
Posted by Eliud Uwasenko at 2:38 PM 4 comments 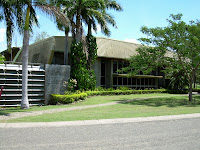 The 2009 orientation for first year intake at Pacific Adventist University commenced yesterday, 17th February 2009. It began with opening address by the Vice Chancellor, Dr. Branimir Schubert. He wlecomed the students to life at PAU as students.

Some of these students will remain at the beautiful campus for five solid years, ecpecially those intending of pursuing double majors in business. For others it will be four years. There are some who will do foundation studies here and continue on at the School of Medicine at Taurama campus of the University of Papua New Guinea. The last lot are those who will be exiting with Diploma in Business Administration will stay for three years.

Today staff and faculty did introduction at the main chapel. The students then divided into various small cell groups to go to other activities organised for the day.
Posted by Eliud Uwasenko at 9:28 AM 1 comments

I just resumed work from leave. I was away from my office for 4 weeks. During this break id did a lot catch up work around home. Most of my time was spent in gardening, trying to plant enough to supply our table as well as a few extra income from surplus.

I had thought of flying home to my village to check on my people there but could not make it. I just returned from burying my father-in-law at Kainantu so i could not put enough funds together to finace my return trip. I will visit them later on this year if time and money allows. 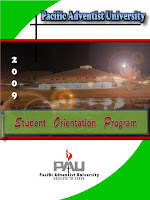 Posted by Eliud Uwasenko at 10:57 AM 0 comments

Saved by the Enemy

Saved by the Enemy 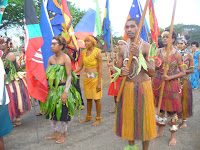 
It started off with moving and challenging speeches from the three key speakers. When presenting his speech, the outgoing president of the Papua New Guinea Union Mission Students Association, Mr. Jethro Kasse reflected on the struggles and hardship the nation has come through since independence and posed some challenging questions to today’s generation. Another notable speech came from the dean of business at PAU, Mr. Ben Thomas. He challenged the student body and those already in the work force to think twice before making a move to seek employment opportunities overseas. He emphasized that our country desperately needs graduates to fill the different capacities of workforce across the nation to move it forward. Many listeners agreed to his challenges.

Many different cultural dance groups representing the diverse cultural groups around the country participated in this celebration. Participants who participated from the pacific region include Solomon Islands, Tonga, Kiribati/Tuvalu, Samoa, and Fiji including a lone Aussie.


Many commended the student leaders of Papua New Guinea Union Mission for this celebration. The last time such celebration to commemorate the country’s birth was in 2003.
Posted by Eliud Uwasenko at 8:35 AM 1 comments

Eliud Uwasenko
Port Moresby, NCD, Papua New Guinea
Male, form the EHP. I have been working and living in Port Moresby since 1998. I was introduced to basics in blogging by a friend.

Which country is the second largest island country?